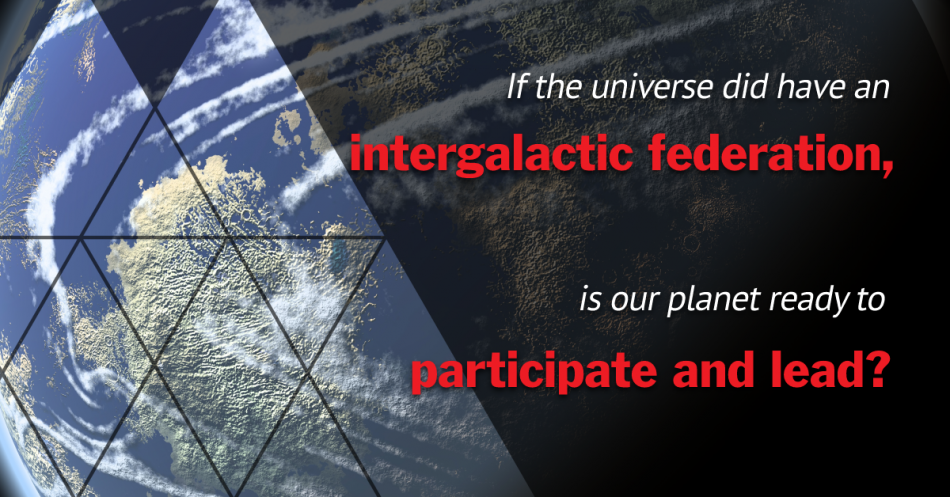 When it comes to the future of work, our entire universe has shifted. As a force-for-good change consultancy, this is fantastic news as the world embraces democratised learning and technology and new models of power as we say our final goodbyes to the institutional nature of the Information Age. And bring in new models of work, technology and power dynamics in 2021. For us at Earth2Mars, the entire conversation about leadership is no longer about egos, agendas, qualifications, and experience for our clients, but rather what planet earth needs right now to solve some of the biggest challenges we have ever faced, professionally, personally and holistically as a species. And with millennials making up more of the workforce than any other generation, in fact 75%, the future of leadership is NOW.

Recently in the news the former Israeli Space Chief, Prof. Haim Eshed, at the age of 86,  publicly announce to the Jewish Press the confirmation of aliens and the existence of an intergalactic federation that some of world leaders are aware of. Despite being a very respected academic and leader, we are certainly taking this with a pinch of salt as his book launch for The Universe Beyond the Horizon – conversations with Professor Haim Eshed was immediately promoted off the back end of the polarising information. But it did allow us to have robust conversations with our coaching and change clients and got us thinking hypothetically:

Here are our top 5 leaders who we think are those to follow in 2021 + and who to emulate if you want to make a real difference for our planet and beyond:

Why we love him?

Despite growing up in South Africa and experiencing severe bullying, Elon has broken the mould for what leadership looks like in this century. Rejecting all institutionalised learning and expectations, his passion for knowledge and continuous learning has allowed him to leave behind the Information Age and focus on creativity and life changing solutions that our planet needs right now. His relentless and authentic focus on the big picture, vision and mission, despite facing huge criticism and backlash from others (including his own mentors and heroes) makes him one of our top candidates who we can trust to lead innovation in 2021 and beyond.

What he has achieved recently for Planet Earth?

Despite having what is seen as a typically traditional and conservative role as prime minister, Jacinda Arden is a breath of fresh air who personifies brave human and authentic leadership that’s much need in 202X and beyond. She brings her full and vulnerable self to the position, leading with both mind and heart as a strength which has captivated her followers on a world platform. She has proven to deeply care about people, taking a collaborative yet tough stance by putting her people’s welfare above her own and challenging many global leaders by being the example of what public service truly is.

Why we love him?

Who says you need to be a millennial to lead and organisation into the future of humanity? Here is a man who despite working with and for one of the most archaic and traditional organisations on the planet, put the true values of Christianity at the centre of his leadership and challenged the status quo to help bring the global church into the inclusive modern age. His vision and passion for humanity has been a life-long dedication, well before becoming Pope officially. The backlash from the outgoing generation was a small price to pay to truly lead from a values-based mindset in a modern age.

What he has achieved recently for planet Earth?

US politics is not for the faint of heart these days. Yet Kamala Harris is fuelled with an unstoppable vision, energy and purpose. Refusing to be spoken over or intimidated by a very white, male dominated arena, Kamala has broken paradigms in the so called “old-boys” club and caused waves of exciting and positive changes. And best part of all, she remains smiling and completely neutral in the face of aggressive old power tactics and political rhetoric with an emotional intelligence that disarms even the hardest of resistors in their tracks. Kamala is the perfect mix of intelligence, conviction and credibility coupled with an uncompromising sense of justice and unapologetic smile in the face of adversity.

We love it when a leader turns a huge loss into a major opportunity for positive change in the world. Despite being dealt a devastating loss in her campaign to become governor or Georgia, she kept true to her life purpose and turned her passions and energy towards driving BIPOC.

to find their political voices and encouraging communities to get out, be heard and vote. True leaders know that there is no such thing as failure, only feedback and there are multiple channels and pathways to shine and lead others who have been marginalised by society into taking a stand and being heard.

Whether aliens do exist or not, perhaps the question still remains…is planet earth ready to play a bigger game when it comes to leadership?

We are passionate about helping emerging leaders evolve into the future of work. And from our perspective, the future is looking incredibly brave and especially human(e)!

Keen to use our platform to share your inner leader voice with our community and networks?

Email us at space@earth2mars.com.au to find out more