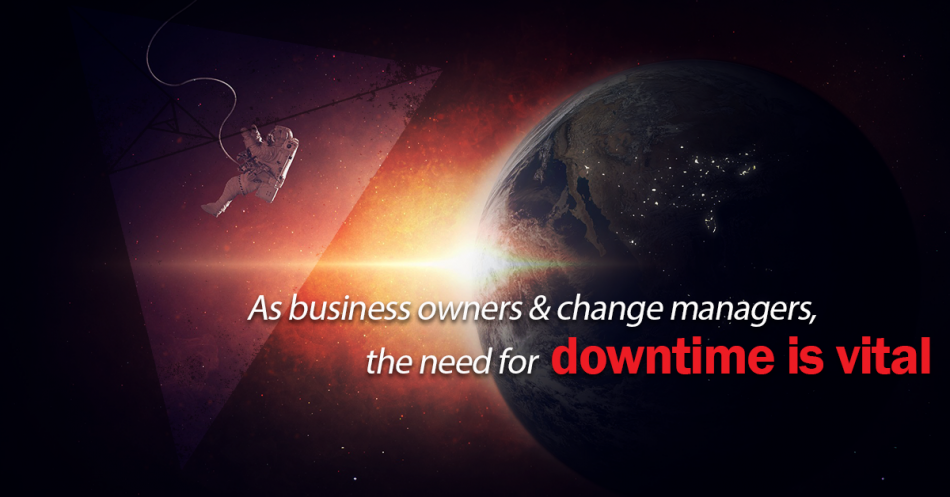 As the future of work comes into play, we are seeing development and evolution in the physical way we work. I’m not just talking about the co-working spaces like WeWork or the technology transformations of AI and machine learning but also in the flexibility of how we work.

What we are seeing is a new culture and psychology in activity-based work. We can start to project these insights into our future of work on Mars.

Historically, organisations have grown bigger and bigger until they become a Death Star full of control. And then we fight the rebellion. I’ve seen the market turn into a social and conscious force for good business eco-systems where technology has created a by-product of transparency.

Evolving Towards a Plug & Play Model

We’re moving away from this Death Star model and moving into a space station model. This is where people are flying in and out between space ships and space stations, plugging in and out. The hybrid used to be the independent contractor. Now we are seeing this plug and play model even within our own organisation. We are no longer bound to a physical location.

Space HAS to work this way. You’re going to have a team that plugs in and plugs out when and where they’re needed. We’re all going to take off in a space ship; but from there we’re going to go to a space station, a moon base or another planet – problem-solving as we go.

Robotics to the Rescue

The biggest challenge will be when we first move to Mars. This is because we are going to be physically bound and isolated within a limited space for the first couple of decades. Whilst robotics are going to be building power plants, habitats and finding renewable fuel sources, it’s going to have these real challenges. My vision for this is that AI will build for the needs as it arises, but initially, it is going to be outcome-focused. So if you don’t like KPI’s, don’t go to Mars.

We’re still going to do and achieve amazing things with growing plants impacted by different physical gravity of Mars, and humans are going to physically respond to this. With robots, it doesn’t need a pat on the back, doesn’t need sex, doesn’t need sleep, doesn’t need to take sick leave. But humans are wonderfully more complex than a robot.

I love what is going on in spaces like Barangaroo, where I was delivering a human-centred design workshop. It was tailored to creative thinking, collaboration and creativity where artists were utilised with flip charts, post-its and digital walls – all converged to create one vision.

How can we take some of these things to ensure that we stay creative and healthy in Mars? But most importantly, to ensure we stay motivated, committed and inspired. Imagine if we had a whiteboard that followed us on digital screens. Space needs to be compelling and sexy otherwise for the long term, we’re not going to go (unless you’re Josh Richards.)

The habitat for Mars has to take into account visual inspiration. Much like things that are already being utilised on cruise ships on earth with things like the Virtual Balconies on Royal Caribbean. I imagine a collaborative AI integration into this that is utilised to facilitate team building. But also allowing for your own space to disconnect and recharge as an individual. As business owners and change managers, the need for downtime is vital.

Google is ahead of this sort of development for the future of work with things like a breakaway space for isolation and bubble yourself away for an hour or two for the spaciousness to process. My best moments often come from personal self-reflection and meditation to think moving out of the ‘doing’ and into the ‘becoming’.

An AI Automated Management System will be able to adapt to the needs of the human far faster than any human facilitator. We are already seeing some powerful preliminary AI tools being developed to support mental health. I’ve been experimenting with tools like Woebot, an AI mental health app utilising CBT (Cognitive Behavioural Therapy). It can catch you when you’re in a stressed moment you can’t coach yourself – even the best of us forget to check in with ourselves.

We can’t afford to be clunky in space and on our future planets. AI and machine learning are a certainty in the future of work on Mars.

earth2mars is excited to announce that we are about to launch our change management program for facilitators and trainers. It is designed to help you learn change the modern martian way and tailored to help organisations address culture and technology disruptions.

We built this with the strong belief that everyone has a place in the future. It’s time to do things differently and challenge the old school mindset.

It is important that the people who join this program are future-focused and congruent with our company and brand values, so we ask that you take 5 minutes to fill out this form here.