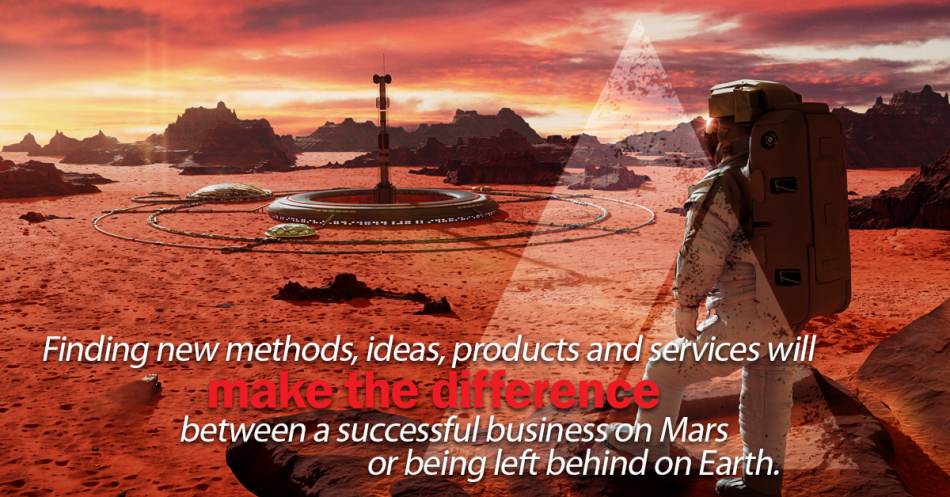 Organisations That Are Mars Ready.

The race to Mars is on thanks to Elon Musk’s SpaceX company, but what happens when we finally get there and begin colonisation. Which business organisations will flourish on our future red planet home and why? Finding new methods, ideas, products and services will make the difference between a successful business on Mars or a business left behind on Earth. In our previous blog post we discussed the importance of human-centred design and how feedback is important for company growth and innovation. Here are some great examples of companies that we at Earth2Mars believe are ready for Mars.

California-based company Apeel Sciences are tackling the problem of the $2.6 trillion-dollar global food waste dilemma by creating sustainable solutions to the world’s growing and compelling food demands. Apeel Sciences have developed plant-based shelf life extension technology for fresh food providers to double the lifespan of harvested fruits and vegetables, that improves quality and reduces food waste. If that wasn’t enough, they also have the backing of humanitarian and former Microsoft CEO, Bill Gates, who knows a good thing when he sees it.

Speaking of Microsoft their Enhanced Medical Mixed Reality technology or EMMR for short has allowed for advancements in aged care. Partnering with SAAB, Silverchain and Microsoft’s own HoloLens technology they have merged realities both real and virtual to augment the home care environments of the elderly with data and information visualisations.  Importantly, the HoloLens headset doesn’t disrupt your experience of the world like virtual reality goggles. It doesn’t compromise the engagement between medical staff and clients. Instead, it creates a space where physical and holographic digital objects co-exist and interact in real-time. Microsoft’s partnering with companies to learn the practical human-centred applications of their HoloLens technology reveals the true spirit of a pioneer and we will see them improve and augment life on Mars.

Amazon is another company that is always on the cutting edge. The re:Mars (https://remars.amazonevents.com/) sponsorship program is a great testament to searching for partners with capabilities in machine learning, automation, robotics, and space. Amazon prides themselves on innovation and it is through this program and the ideas, science, technology and practical applications that we will see the inroads to infrastructure and logistics in the colonisation of Mars. Besides, people on Mars will still need that number one trending item on Earth to send to them on their birthday.

Bioreactor technology developed by LanzaTech, a six-year-old biotech company in Chicago has created a system that will reduce our dependence on fossil fuels. The prototype bioreactor is filled with microbes that eat waste and produce ethanol. The bioreactor has already begun transforming carbon emissions into fuel, creating almost 60 million litres a year from a steel mill just east of Beijing as well as plans for being installed at a Belgian Mill owned by Arcelor-Mittal, the world’s largest steel producer. LanzaTech’s ethanol is being used to create jet fuel (already their fuel blend has powered a Virgin Atlantic plane across the Atlantic) as well as a petroleum substitute in plastics, rubbers and synthetic fibres found in everyday consumer products. The company’s industrial partners can license the technology and sell the fuel themselves. With companies like LanzaTech leading the way, the hope is to reduce the carbon footprint on Earth through innovation and sustainability, “to show the world that carbon reuse is feasible, possible, and can make economic sense,” says CEO Jennifer Holmgren, which can only benefit us when we begin colonising Mars.

Another great company that is using technology to verify the truth of information is Truepic. The sheer time and distance between Earth and Mars and the information shared between the planets would need to be accurate, consistent and verified before being disseminated to the public. Truepic acquired Farid’s start-up, Fourandsix Technologies and using Farid’s digital-forensics tools, Truepic will soon be able to evaluate the trustworthiness of the billions of images taken outside its camera app. The company’s partnership with Qualcomm, which make smartphone processors used by Samsung, LG and Xiaomi especially, is a game-changer. To offer an extra layer of security when it comes to image authentication capabilities in the palm of your hand will help against legitimate problems of identity theft, catfishing, fake news and disinformation in real-time and hopefully reduce the damage these problems cause before they get out of hand.

The reason we picked these companies is not just for the innovations they’re creating but the spirit in which they partner with other companies to improve life here on Earth. If we can get things going in the right direction here on Earth, who knows what we can accomplish on Mars.

Looking to upgrade your skills as a leader or change manager that fits in with the modern age of adaptability and change? Our course focuses on human-centred design that decodes the culture of a business that makes long-lasting change that eliminates bullies in the workplace.