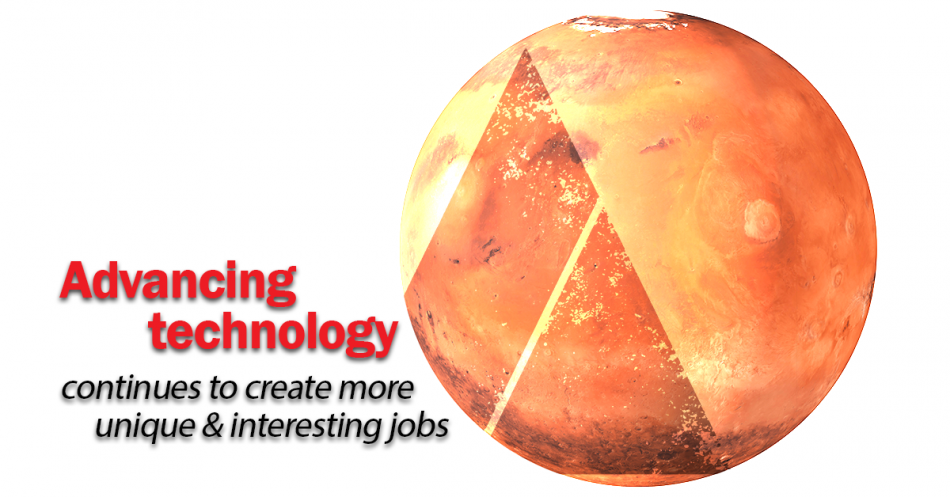 Your Next Job Could Be on Mars

For most of us when we think back to our childhood, the things we have now were not available to us as kids; a laptop, a smartphone, Wi-Fi, and social media platforms that tether us to the rest of our world. You likely got to this blog through one such platform. In the future of work on Mars, we might one day look back and be amused as to how we only ever thought we would be confined to the pale blue dot of Earth. In the same way we look back to our childhood without the staple diet of tech we’re surrounded by now.

Journey Towards the Red Planet

Advancement in technology continues to create more unique and interesting jobs – for now, all of them based on planet Earth and pushing organisations to change. The market is feeling the pressure cooker of change, and this has set the stage for the gig economy and drive for some incredible change supported by our technology. As Elon Musk, NASA scientists and others continue to bring the possibility of living on another planet into the near future, the interplanetary economy and job market will be just around the corner.

Elon Musk’s SpaceX aims to send the first astronauts to Mars by 2024. The national science agency in Australia CSIRO stated last year that Australia should step it up in contributing towards building a moon base and in fact multi-planet settlements maybe needed for the long-term survival of humanity. Musk believes the only thing standing in the way of jobs on the Red Planet is “basically, building the base.”

With the infrastructure in place that Musk refers to, we could be applying for jobs on Mars just as we do now on our home planet. Few tasks in the universe will have a higher level of personal meaning and purpose. In this case, the level of job success may determine the fate of those doing the work in the future, not to mention have the future of humanity in their roles.

The first jobs on Mars will involve a lot around the construction of small-scale mining (including prospecting), and low-rate manufacturing activities, along with support functions of cooking and cleaning.

Initial work shortages on Mars would force greater emphasis on work involving machine maintenance rather than direct physical labour. Once the infrastructure base expands, a broader range of job opportunities will be available, such as medicine, agriculture, education and service. We also don’t really know yet how the human body will adapt to the Mars environment over long periods. Strength in science and mathematics will be most desirable.

Most jobs working in space are currently based on Earth, however space exploration companies require people in every career discipline, with opportunities in engineering, software development, manufacturing, human resources, design, finance, IT, legal, marketing, sales and many other jobs that exist on our planet. Whatever your interest is, if it aligns with a passion for space exploration, you will find roles that you can apply for.

The Commute to Mars

For Mars to remain a viable option for a new economy, that is affordable, safe and reliable, frequent transportation must be available to the general public. Reusable rocket technology like Musk’s will be essential to creating the equivalent of the airline industry in space. Initial passenger rockets could potentially carry up to 100 people or more and 450 tons of cargo.

Richard Branson’s space tourism company, Virgin Galactic, has hundreds of customers who have already made deposits toward future space flights. It’s certainly not a quick commute from Earth with the travel time being around 7 months in space. So if you’re looking to work on Mars, make it a permanent move, at least in the foreseeable future.

With the opportunity to be highly innovative on Mars this will bring other aspects of work to the red planet, to innovate will be a strong talent attractor. Those in change management with an enthusiasm for human cantered design will ultimately be in a better position to help organisations and the people in those organisations to be ‘Mars ready’.

Looking for a career sidestep into Change Management? Expand your existing knowledge?

Join a community that nurtures and supports each other? Enter HERE for your chance to win a seat and learn ‘Change Management’ the Earth2Mars way.